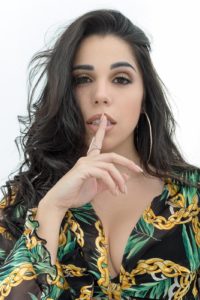 Brenda Fernandez was born in Mexico City on March 13, 1990. Since childhood, she did impressions of artists like Selena and Jennifer Lopez and dreamed of becoming a star herself. She was always an outstanding student in school, and since young she participated in school talent shows, in musical comedies, and in dance competitions and shows, area in which she stands out. At first, her art was expressed through Mexican folklore, but it didn’t take long to open up to other styles and train in different disciplines such as jazz, urban contemporary, reggaeton, heels, dancehall, salsa, bachata and hip- hop. Her musical influences were mainly 90’s pop, Latin pop, and Spanish ballads; but later on she would also fall in love with other musical styles such as reggaeton, dancehall, R&B, salsa, bachata, and afrobeats.

In 2014 she leaves everything behind, friends and family. She leaves Mexico and moves to Canada looking for a better quality of life and opportunities to reach her dream of becoming a confirmed artist. Like her partner Kery, she enjoys learning and speaks English and French, in addition to her mother tongue, Spanish. In just a few years she has achieved to choreograph and perform in major events and festivals in Montreal such as Just for Laughs, Weekends du Monde, Canada Latin Awards, RepreZent, Articien, and Montreal Salsa Convention. But also in events in other cities of Canada such as Loto Quebec Fireworks (Quebec), Quebec International Salsa Festival (Quebec), DansEncore Festival (Trois Rivières), Ottawa International Salsa Convention (Ottawa), Canada Salsa and Bachata Congress (Toronto).